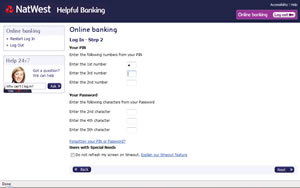 NatWest, a UK-based bank, has a unique login page that makes it safe to sign into your online bank account even on untrusted computers. The login page makes it impossible to employ the Revised Vesik Method that is ordinarily the best way to beat keyloggers, but it more than compensates with its clever login requirements.

So suppose a keylogger captures every stroke you enter – are you safe? Yes, since the six digits that a keylogger could scrape are likely to prove useless when the next login page is generated. The new page will ask for different characters, and it won’t regenerate new requirements until those characters are successfully entered. That’s important, because otherwise it might be possible to refresh the page until the desired six digits are requested again.

As safe as other techniques?

You might wonder if the trick of asking for just six digits means that the login procedure is less safe than one that asks for eight. I believe it is, but not in any sense that matters as long as there is a limit to the number of incorrect login attempts that can be made. Like most banks, Natwest hinders password-guessers by temporarily blocking access to online banking after a certain number of failed login attempts

So, how much less safe is NatWest’s request for six digits instead of eight? Well, guessing an eight digit password composed of numbers and varied case letters would see success about 1 in 200 trillion times; guessing a single number from a four digit PIN and then guessing the correct three digits from the same password as before would see success about 1 in 2.4 million times. There is a difference, but it doesn’t really matter if the temporary lockout feature is working properly. In my judgment, the anti-fishing benefits make NatWest’s login procedure safer than login pages that ask for complete passwords.

The one downside is that logging in is inconvenient, since you have to mentally count to the right digit in your password before entering it. Still, Natwest’s login requirements ought to be considered industry best-practices. I hope to see more banks adopt the technique.