The Nigerian scam (also called “419” or “advance fee fraud”) is, I was surprised to discover via Snopes, a very old one:

The Nigerian Scam has been emptying the pockets of victims for decades, first through letters, then with faxes, and now via e-mail. In its earliest incarnation, which dates to the 1920s, it was known as ‘The Spanish Prisoner’ con. In that long-ago version, businessmen were contacted by someone trying to smuggle the scion of a wealthy family out of a prison in Spain. But of course the wealthy family would shower with riches those who helped secure the release of the boy. Those who were suckered into this paid for one failed rescue attempt after another, with the fictitious prisoner continuing to languish in his non-existent dungeon, always just one more bribe, one more scheme, one more try, away from being released.

Who is falling for these scams? The website for London’s Metropolitan Police says it’s not who you might expect:

The letters are often littered with spelling mistakes and bad grammar. This is a deliberate ploy by the fraudsters to induce the potential victim to believe that he is dealing with uneducated people who would not have the ability to defraud him/her. Nothing could be further from the truth! The majority of victims prove to be professional business people, doctors and lawyers.

The 2006 Internet Crime Report, prepared by the National White Collar Crime Center and the FBI, shows that the Nigerian scam accounts for a small percentage – just 1.7% – of reported total dollar losses due to cybercrime, but that seems to be a function of a few people losing a lot of money. The median loss for someone tricked by a Nigerian scam is $5,100, seven times greater than the median dollar loss for other referred cases of fraud, including auction fraud, failure to deliver merchandise or payment, and check fraud.

The Nigerian scam is so popular it has engendered a new cyber-sport called scambaiting. The goal is to “enter into a dialogue with scammers, simply to waste their time and resources”, as well as to entertain fellow scambaiters with the resulting correspondence, photos, and recorded phone conversations.

I AM MINISTRY OF THE TREASURY OF THE REPUBLIC OF AMERICA. MY COUNTRY HAS HAD CRISIS THAT HAS CAUSED THE NEED FOR LARGE TRANSFER OF FUNDS OF 800 BILLION DOLLARS US. IF YOU WOULD ASSIST ME IN THIS TRANSFER, IT WOULD BE MOST PROFITABLE TO YOU.

Read the rest of the spoof here.

What prices tell us about risk 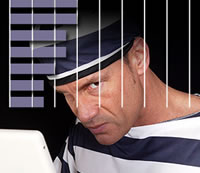 The Economist, reporting research by Symantec, has an interesting chart of the most common goods and services offered by cybercriminals.

You can use the prices on the right of the chart as a sort of risk indicator: if a criminal steals your bank account details, you can expect to lose the amount another criminal is willing to pay (plus the value of the second criminal’s time) to get those details. Keep in mind that these values represent the average (mean) amounts victims will lose and criminals will gain – in reality, some victims will lose a lot more and some a lot less.

Most interesting feature of the chart: email passwords sell for more than full identities. If you think your email password isn’t very valuable, you should know that cybercriminals think otherwise!