Technology does not equal security

Bruce Schneier, an author and security expert, commented a few days ago on an article on Yahoo News that is pertinent for readers of this blog. The article stated that a group of European businessmen and researchers is attempting to develop software that will enable ground crews to take over the controls of an airplane should hijackers attempt to use the plane as a weapon.

The article reports that:

The system would be designed in such a way that even a computer hacker on board could not get round it.

Obviously, there is a potential problem with this. What if the hijackers use this system to override the controls of the plane END_OF_DOCUMENT_TOKEN_TO_BE_REPLACED

Comments Off on Technology does not equal security

Windows firewall is not good enough

As far as I know, Windows Firewall, which comes with Windows XP Service Pack 2, is fairly effective at inbound protection (warding off hackers and other threats coming from the outside world), but it doesn’t have any outbound protection.

Outbound protection is important because it can prevent spyware on your computer from sending the information it has collected back over the internet to whoever is trying to spy on you. END_OF_DOCUMENT_TOKEN_TO_BE_REPLACED

Comments Off on Windows firewall is not good enough

This is an old story, but so is the problem. By following some of the advice on Defending the Kingdom, you should be able to avoid the fate of this man, who was arrested for “spam rage”:

Booher threatened to send a “package full of Anthrax spores” to the company, to “disable” an employee with a bullet and torture him with a power drill and ice pick; and to hunt down and castrate the employees unless they removed him from their e-mail list, prosecutors said.

Booher said the problem stemmed from a program he mistakenly downloaded from the Internet that brought a continuous stream of advertising to his computer.

Comments Off on Spam rage?

Your computer is hopelessly lost to adware and spyware and viruses. I know because I’ve seen computers like yours. If you upgraded to Firefox as I suggested in the last post, you’re headed in the right direction, but there is more to be done.

Now you need to download two programs (free, of course) that will kill anything that manages to get by your defences. END_OF_DOCUMENT_TOKEN_TO_BE_REPLACED

Comments Off on Destroy spyware and annihilate adware 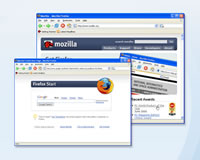 Comments Off on Get Firefox and be safer
Next Page »