I’ve heard of and personally encountered a number of e-commerce websites like the one described in this NYTimes article. The proprietor of DecorMyEyes.com promises the cheapest designer eyewear on the net, intentionally delivers something other than what customers order (a cheaper or counterfeit model, for example), and then stalls, threatens, cajoles, and harasses people who try to get their money back. He makes money when customers give up trying to get a refund, allowing him to pocket the difference in the amount he charged their credit cards and the value of the goods he shipped.

I believe that the majority of e-commerce websites deliver what they say they will, but you need to know how to avoid the few that won’t. Interestingly, the huckster who runs the site described in the NYTimes article provides the answer:

Selling on the Internet, Mr. Borker says, attracts a new horde of potential customers every day. For the most part, they don’t know anything about DecorMyEyes, and the ones who bother to research the company — well, he doesn’t want their money. If you’re the type of person who reads consumer reviews, Mr. Borker would rather you shop elsewhere.

Mr. Borker doesn’t want cautious, conscientious customers because those customers reduce his hourly wage. Why bother selling to these people when there are plenty of shoppers who will give up trying to get their money back without much fuss? That is why, amazingly, the owner of this scam website isn’t troubled by the bad publicity that makes it easy to protect yourself.

Just as changing your password to something marginally more complex than the typical internet user’s password makes you an undesirable target, doing a bit of research on the net makes you vastly less likely to fall victim to an e-commerce scam.

When I say “a bit”, I really mean it. It takes two seconds to type “decormyeyes fraud” into Google’s search engine. Every search result I got when I did that clued me in to the fact that this website is bad news: 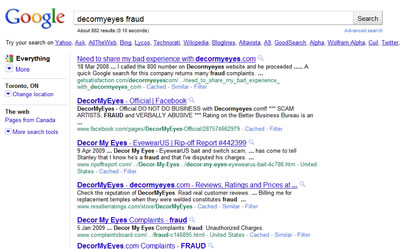 A Better Business Bureau search piles on the evidence: 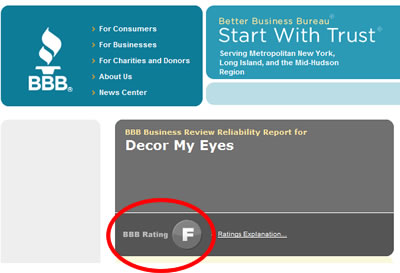 So that’s it. The next time you are thinking of buying from an online retailer, just do a quick Google search like “companyname fraud” or “companyname scam” and then check out the Better Business Bureau rating. Most people spend a good amount of time researching their internet purchases — allocating just a couple of seconds to protecting yourself from fraud should not be too much of a burden.