How do you feel about this? From an NYTimes article, Privacy Lost: These Phones Can Find You:

Two new questions arise, courtesy of the latest advancement in cellphone technology: Do you want your friends, family, or colleagues to know where you are at any given time? And do you want to know where they are?

I was rifling through the statistics for this blog recently, and noticed that this site ranks highly for Google Images searches of “fat man“. The image responsible (credit: Yuri Tand), which I posted adjacent to a story about how some big-name antivirus products are bloated and unruly, is currently ranked third on Google:

Unfortunately, the photo above is still ranked less highly for fat man searches than this gem (as well as a couple other, less charming photos): 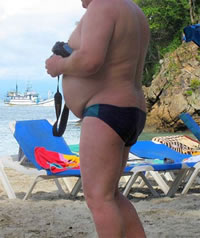 I realize that the fat man term is a highly competitive one, but here’s hoping this site overtakes the current forerunners!

If you’ve read about passwords to avoid and how to make great passwords, you’re probably pretty secure password-wise.

The gist of both of those posts was this: good passwords appear to be random from the perspective of a guessor, and bad passwords are anything but random (your name, your dog’s name, numbers from you driver’s licence, etc.).

What about typing diagonally on one’s keyboard? Does that constitute a good password?

It sure can look like it. Here’s an example of an eight-character password typed diagonally: 1qsx4rgb. Most human observers would fail to see much of a pattern in that password. In other words, it looks random. But it’s not.

Password guesser’s know every trick in the book. It’s not that hard for them to design a program that tries out some (or all) of the more common diagonally-typed passwords. Keep away from them.